Get the latest updates!No Need to sign in, but feel free to sign up for our Newsletter and Blog updates.

New York State sure does have its share of waterfalls! From the giants found at Niagara Falls, Letchworth State Park, Ausable Chasm, and Cohoes, to the smaller, yet picturesque, falls that dot the landscape across the state, waterfalls are a driving force for industry and tourism.

We’ve put together a list of some favorite waterfalls with brief descriptions, outlined a track, and created a map so you can plan a waterfall roadtrip across the state, and discover your favorite falls at your own pace! The best part is that you can find so many more waterfalls than what we’ve included here!

By clicking the name of a waterfall, you will be taken to a dedicated page for that location. On this page you’ll find information and two maps, one of which will show you the closest waterfalls to your, or the selected, location. Directions will also be available. The possibilities are endless!

While we try to include as much information as possible, we all know information can be fluid and change at a moment’s notice. Please take the time to check with parks ahead of time, especially seasonally, before heading making plans and heading out. We’ve included links to a number of places that may require an entrance fee, or be subject to weather or seasonal closings.

Note: The brief descriptions are not meant to be used as directions. Use the included map to plan your route and get driving directions.

Bronx River Waterfalls – When you hear someone speak of New York City, the last thing you may think is “waterfalls”. However, although the lower elevation prevents the formation of large waterfalls, the Bronx River hosts a handful of cascades in the area of the Bronx Zoo and New York Botanical Garden.

Wappingers Falls – Wappingers Falls is where a waterfall of the same name forms as Wappinger Creek flows under Route 9D. The cascade measures a total of 75ft over a series of small drops that span approximately 30 yards.

High Falls (Philmont) – A small village with a large hidden gem! Philmont is home to High Falls Conservation area where you’ll find two waterfalls, one being the 150ft High Falls. A second waterfall, found at creek side just before the main falls, is Agawamuck Falls. Here, water flows down a hillside, fanning out at the bottom, and split by a small patch of earth holding a tree.

Mount Ida Falls – In Troy, you can find several waterfalls within the city’s boundary. Most notably are Burden Falls and Mount Ida Falls; both well-known for their roles in the industry and history. These falls, with several others, are part of the Narrows Cascades and Heritage Trail and Burden Park Environmental Park.

Cohoes Falls – This “Niagara of the East” spans 1,000ft across the Mohawk River and stands at 180ft.

Natural Stone Bridge and Caves Park – Natural Stone Bridge and Caves Park in Pottersville is home to the largest cave entrance in the eastern United States… and some waterfalls. Sawmill Falls and Noisy Cave Falls, which forms inside a cave, are the two must-see falls here. Aside from caves and waterfalls, they also offer adventure tours, wedding venue, rock shop, gift shop, museum, and activities for all ages.

Split Rock Falls – Be sure to stop by Split Rock Falls in Elizabethtown. This roadside favorite is a hot spot (no pun intended) in the Summer months where you’ll find a crowd cooling off in the crystal-clear pools of Adirondack mountain water.

Roaring Brook Falls – Driving west on route 73 from Split Rock Falls, you’ll pass 300ft Roaring Brook Falls. There’s a pull-off to view the falls as a whole, or you can park in a lot at the bottom of the hill and hike .03-mile to the base of the falls.

Stag Brook Falls – Making your way through Lake Placid and up to Wilmington, you can visit Stag Brook Falls on Whiteface Mountain. The star of this trail is often the only waterfall visited here despite there being a multitude of cascades further up the 0.6-mile trail!

Auger Falls – This 40ft waterfall forms on the Sacandaga River in Wells. A short hike through the forest leads to the falls.

OK Slip Falls – This 250ft cascade forms on OK Slip Brook as it joins with the Hudson River Gorge. An approximate 3-mile hike to the falls offers a lateral view.

Bog River Falls – This picturesque waterfall forms beneath a stone bridge as the river empties into Tupper Lake. An upper section of falls makes for a nice backdrop for a riverside picnic.

Rainbow Falls at Ausable Chasm – Ausable Chasm, often referred to as the “Grand Canyon of the Adirondacks”, is home to 70ft Rainbow Falls; possibly the most photographed waterfall in the Adirondacks. The iconic waterfall can be seen from the bridge on route 9 that spans the Ausable River. Aside from the waterfall, there is also a self-guided tour, raft ride, tubing, adventure course, disc golf, and a host of other activities.

High Falls (Chateaugay) – Next, head west to Chateaugay where you’ll find 120ft High Falls at High Falls Park Campground. After paying a small fee to enter, you can visit the waterfall, or camp overnight if you’d like.

Rainbow Falls (Grass River) – The Grass River and Tooley Pond Road are popular for the high number of waterfalls that can be found in a relatively small area. Harper, Lampson, and Twin Falls are just a handful of waterfalls at the ends of short hikes or at roadside.

Pratt’s Falls – Continue west on NY route 20 and you’ll come to Pompey where Pratt’s Falls Park is home to 137ft Pratts Falls. A trail brings visitors to a viewpoint near the bottom of the falls.

Tinkers Falls – From there, you can make your way to Tinkers Falls; a 45ft waterfall located in the Labrador Hollow Unique Area. There are trails that lead to the base and along the top of the falls, as well as a scenic overlook.

Carpenter Falls – Carpenter Falls, the 76ft waterfall at the Bahar Preserve in Moravia, forms on Bear Swamp Creek at roadside. To get a good view of the falls, park in the small parking area and follow the trail to the falls.

The many gorges found in Ithaca have led to the saying “Ithaca is gorges”, and rightfully so. If you’re a fan of waterfalls, Ithaca has enough to keep you busy for a while. Robert H. Treman and Buttermilk Falls State Parks, Cascadilla Gorge Trail, Swedler and Thayer Preserves, Fall Creek Gorge Trail, and Wells, Ithaca, and Taughannock Falls are all well-known waterfall locations in the area.

Driving west from Ithaca is Watkins Glen, with Montour Falls just down the road. Watkins Glen State Park is home to 19 waterfalls, including the famous Rainbow Falls! The surrounding area contains numerous waterfalls as thousands of years of erosion have created dozens of gorges and glens that often contain multiple cascades. Hector Falls, the massive roadside waterfall that forms just before the creek enters the lake is an oft-visited spot just north of town, while Aunt Sarah’s, Shequaga, and Eagle Cliff Falls at Havana Glen Park, are frequented in Montour Falls to the west.

Grimes Glen – Naples is the next spot to find cascades hidden in gorges. Grimes Glen and Tannery Creek both have large falls tucked away upstream!

Letchworth State Park – Lower, Middle, and Upper Falls, in addition to the more than dozen other waterfalls found throughout the park will keep you busy if you’re not already distracted by the stunning views!

Eternal Flame Falls – Just south of Buffalo, in Orchard Park, you’ll find another unique cascade in Eternal Flame Falls. This waterfall houses a natural gas spring that is often ablaze in a small cutout behind the falling water.

Niagara Falls – Now it’s time to get to the big one! Head north to Niagara Falls State Park to view American and Bridal Veil Falls on the American Side, and Horseshoe Falls on the Canadian side. Aside from seeing the falls from the overlooks, you can also take a boatride on the Maid of the Mist or get up close and personal with American and Bridal Veil Falls at the Cave of the Winds. For another unique experience, check out Rainbow Air for a helicopter tour over the falls!

High Falls – Rochester is next up with 96ft High Falls and 110ft Lower Falls being the stars here.

Wolcott Falls – Continue east to Wolcott where Wolcott Falls awaits at roadside. View the falls from a deck or make your way to the base for a head-on view.

Kaaterskill Falls – Arguably the most popular of Catskills waterfalls is Kaaterskill Falls. This multi-tiered fall stands at a total of 231ft. At the beginning of the lower trail, you’ll also find Bastion Falls.

Mine Kill Falls – At Mine Kill State Park, this multi-drop fall forms on the Mine Kill.

John Boyd Thacher State Park – At this popular state park you’ll find Mine Lot Falls, a large plunge waterfall flowing over the Helderberg Escarpment. There are also numerous other falls to be found throughout the park.

Rensselaerville Falls – From its crest, Rensselaervile Falls drops a total of 100ft as it winds its way along Ten-mile Creek.

Bozenkill Falls – This waterfall is the main attraction while a number of smaller falls form along the Bozen Kill at Christman Sanctuary in Duanesburg. In addition to waterfalls, there are miles of trails for hikers.

For directions, use our New York State Waterfall Map found in our Knowledgebase. You will also be given the top five closest waterfalls to your location, or a location you enter.

Some waterfalls have a reputation for being dangerous. While terrain and trail conditions can make any waterfall hazardous, ALMOST every accident at waterfalls can be avoided.

By following a few pointers and exercising diligence and common sense, a trip to a waterfall can be a lasting memory rather than a tragedy.

Increased water circulation and the force of the onrushing current can also push swimmers into or under underwater ledges, giving no chance for escape. Many swimmers have perished because they underestimated the power of moving water. Do not swim when conditions even look dangerous. Chances are, they are.

If signs are posted, pay close attention and do not go where they tell you not to. They are there for a reason. Just because you may see others doing things that they shouldn’t be doing doesn’t mean it’s allowed. Instagram stardom doesn’t count if you’re dead. 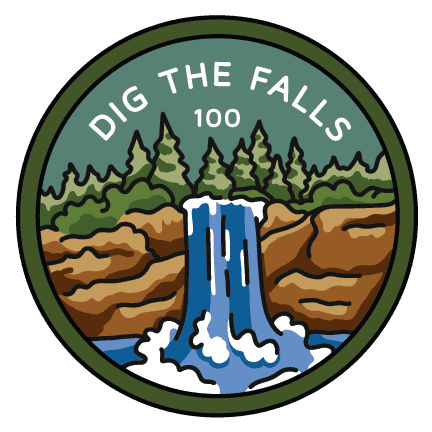 Thank you for visiting!Stop back anytime!

We understand popups can be annoying, but we felt the need to thank you for visiting the site.

We would also be deeply humbled if you consider us a great enough resource to share Dig The Falls with anyone you know.

We do not charge for our services, and never will. We also do not serve up ads or perform any ad tracking on this website. Our goal is to share as much information as possible in a common interest to preserve these wonderful locations for future visitors.