The Chittenango Ovate Amber Snail is an endangered member of the ambersnail species of snails. Discovered in 1905, the snail is only known to inhabit the falls area of the Chittenango Falls State Park.
Attempts to limit the interactions of humans and the snails has been fruitful, but recently an alarming trend has arisen! Impostor cairns are being stacked along creek beds and trails systems everywhere. Well-intentioned hikers have been creating these towers of doom to create beauty among the anarchy of the forest and streams. 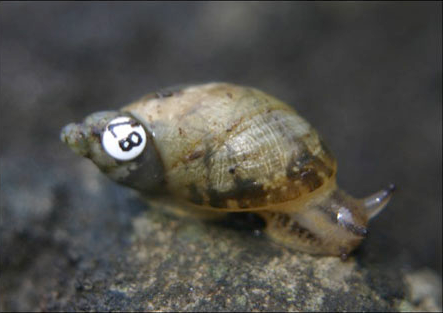 During the morning of the 3rd of August, one such hiker unintentionally passed one of the restricted areas of the park, crossing over and past the board fences and “Keep Out” signs, to build one such impostor cairn. The cairn was made with an assortment of stolen roof tops and entire homes of dozens of local inhabitants and their families. Some of these families were swept downstream and, to date, have not been located. Others were caught unprepared in the morning sun and did not have time to retreat before drying slowly in the sun’s rays.

Reports say the cairn was completed by noon and left behind, beautifying the otherwise art barren landscape of the waterfall’s basin.

Shelly, the last known surviving female of the Chittenango Ovate Amber Shell snails had been in the area of new construction and had heard the cries for help from the families of the victims. Her family had been stepped on by a visitor’s dog the week before, rendering her alone without any surviving family. This recent loss was thought to fuel her need to help members of her community that were affected by the recent construction.

Shelly was not aware that the cairn was built without local trail codes in mind, or that the builder had no previous knowledge of the physics behind stacking round and uneven surfaced objects. She pressed on with her motherly instincts, to ease the sorrows of the affected community and habitat.

At approximately 13:15 that afternoon, the impostor cairn crumbled; thought to have succumb to the vibrations caused by the falls, or a larger truck passing by on the nearby road. Shelly was not recovered from the rubble.

Shelly had no surviving family, although many in the community called her Aunt Shelly. The tragedy of this event only emphasizes the need for cairn building classes, so visitors to the wild anarchic areas of the state can properly build their art, without endangering the art itself. Had this cairn been built properly the art would still be present for many to enjoy.

Please contact your local representative to ask that they fund programs that will put an end to tragedies such as this.